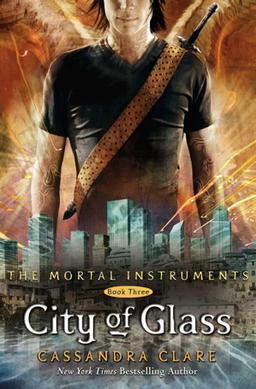 “To save her mother’s life, Clary must travel to the City of Glass, the ancestral home of the Shadowhunters; never mind that entering the city without permission is against the Law, and breaking the Law could mean death. To make things worse, she learns that Jace does not want her there, and Simon has been thrown in prison by the Shadowhunters, who are deeply suspicious of a vampire who can withstand sunlight.

As Clary uncovers more about her family’s past, she finds an ally in mysterious Shadowhunter Sebastian. With Valentine mustering the full force of his power to destroy all Shadowhunters forever, their only chance to defeat him is to fight alongside their eternal enemies. But can Downworlders and Shadowhunters put aside their hatred to work together? While Jace realizes exactly how much he’s willing to risk for Clary, can she harness her newfound powers to help save the Glass City? Whatever the cost?

Love is a mortal sin and the secrets of the past prove deadly as Clary and Jace face down Valentine in the third installment of bestselling series the Mortal Instruments.”

Most prominent of all is of course, the entire story of how Jace and Clary were both infused with angels blood during their mother’s pregnancy. However, since they do not find out about Jace’s true heritage, he spends a good amount of the book thinking that he has actually been created by demon’s blood. This drives him into a type of insanity, if you ask me. He begins to hate himself with such a rage and blames every sin he commits on himself, especially the incestuous love he feels towards Clary which then in turn drives him onto the suicide mission to persue the real Jonathan.

Sebastian is just such a fascinating character, being the perfect mixture of alluring, menacing and psychopathic. He can charm people into believing he is actually a good guy, when deep inside it is all calculated acting and a deep loathing that he still feels. Being born with demon blood, he is born with the incapability to ever experience love, and that is why he is so jealous of Jace and his relationship with Valentine, because he can see that although Valentine was cruel and mean he still loved Jace as much as he could.

We can see a great deal of Izzy’s character come out in this book (finally!) and we can see just how committed she is to protecting her siblings, no matter the cost. Although she likes and respects Clary, she can see just how much she has been hurting Jace and which is why I can understand why she told Clary that she woud want the entire Lightwood family to never see Clary again. I thought that conversation between Clary and Isabelle when Izzy told her that was just so heartbreaking and made tears spring to my eyes. We can also see that Izzy has been haunted by something in her past that has made her incapable of trusting people easily.

And Max, poor sweet Max. I think there are only a certain number deaths in fictional books that can hit me as hard as Max’s could. Although we don’t see the murder taking place, we can definitely feel the impact that it has made. It is beyond injustice that something should happen to a young boy at his age. It brings such anger and sadness to my heart and just makes every moment that we saw Max in the previous books seem so valuable and fragile.

Then finally toward the end of the book, when Valentine finally manages to summon Raziel and kills Jace in the process, Clary uses her one command to bring Jace back from death. We can see just how much he means to her at that point. She could have asked for anything and she decided to bring back Jace, who has touched her heart and life in a way that no one else could have ever done. It is also the point where both of them are finally able to celebrate the fact that they are indeed, not siblings.

The book ends very sweetly, with a grand celebration in Alicante, celebrating the death of Valentine and the end of the war. However, you can also feel the great sorrow that people still carry in their hearts due to the many deaths that resulted from the battle. There is still a lot of healing to be done in the future, but for now, they are all safe.

“So it’s true. You can walk in sunlight. I thought perhaps it might have worn off.”“If I feel the urge to burst into flames, I’ll let you know.”

“Some Laws were meant to be broken.”

“Because if Valentine made me a monster, then I suppose he made you a sort of angel.”

“You never called me back,” he said. “I called you so many times and you never called me back.”Magnus looked at Alec as if he’d lost his mind. “Your city is under attack,” he said. “The wards have been broken, and the streets are full of demons. And you want to know why I haven’t called you?”Alec set his jaw in a stubborn line. “I want to know why you haven’t called me back.”Magnus threw his hands up in the air in a gesture of utter exasperation. Alec noted with interest that when he did it, a few sparks escaped from his fingertips, like fireflies escaping from a jar. “You’re an idiot.”“Is that why you haven’t called me? Because I’m an idiot?”“No.” Magnus strode toward him. “I didn’t call you because I’m tired of you only wanting me around when you need something. I’m tired of watching you be in love with someone else – someone, incidentally, who will never love you back. Not the way I do.”“You love me?”“You stupid Nephilim,” Magnus said patiently. “Why else am I here? Why else would I have spent the past few weeks patching up all your moronic friends every time they got hurt? And getting you out of every ridiculous situation you found yourself in? Not to mention helping you win a battle against Valentine. And all completely free of charge!”

“Tell you what.’ Alec reached for a second seraph blade. ‘We live through this, and I promise I’ll introduce you to my whole family.’

Magnus raised his hands, his fingers shining with individual azure flames. They lit his grin with a fiery blue glow. ‘It’s a deal.”

“You said you were going for a walk!? What kind of walk takes six hours?”“A long one?”

“Malachi scowled. “I don’t remember the Clave inviting you into the Glass City, Magnus Bane.”“They didn’t,” Magnus said. “Your wards are down.”“Really?” the Consul’s voice dripped sarcasm. “I hadn’t noticed.”Magnus looked concerned. “That’s terrible. Someone should have told you.” He glanced at Luke. “Tell him the wards are down.”

“Have you tried talking to her?”“No. We’ve been punching her in the face repeatedly. What? You don’t think that will work?”

“There is no pretending,” Jace said with absolute clarity. “I love you, and I will love you until I die, and if there is life after that, I’ll love you then.”

“If you ever meet the man who could take advantage of Isabelle, you’ll have to let me know. I’d like to shake his hand. Or run away from him very fast, I’m not sure which.”

“Love didn’t make you weak, it made you stronger than anyone I’d ever met. And I realized I was the one who was weak.”

“Is this the part where you say if I hurt her, you’ll kill me?”“No” Simon said, “If you hurt Clary she’s quite capable of killing you herself. Possibly with a variety of weapons.”

“We all tell the truth as we see it.”

“And now I’m looking at you,” he said, “and you’re asking me if I still want you, as if I could stop loving you. As if I would want to give up the thing that makes me stronger than anything else ever has. I never dared give much of myself to anyone before – bits of myself to the Lightwoods, to Isabelle and Alec, but it took years to do it – but, Clary, since the first time I saw you, I have belonged to you completely. I still do. If you want me.”