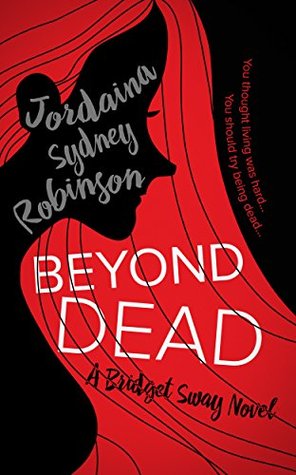 “Dead less than twenty-four hours, with a job that doesn’t pay, a fashion disaster for a uniform and more afterlife rules than she can shake a stick at, Bridget Sway thinks it’s as bad as it can get. And then she finds a dead ghost stuffed in her locker.
Since the police are desperate to arrest her for murder, Bridget’s new best friend convinces her the only way to save herself from an eternity in prison is to solve the murder themselves. With a handsome parole officer watching her every move, an outlaw ghost befriending her and two persistent mediums demanding her attention, solving the murder is not quite as easy as it sounds. And when “murder” turns into “murders” Bridget needs to solve the case … before she becomes the next dead body stuffed in her locker. “

~
A big thank you to NetGalley for sending me a free copy of this book
4 stars
I must say that the beginning of this book blew me away. It was gripping, there was hilarious dialogue and Bridget stuck me as the type of woman every girl aspired to be: strong, independent, headstrong, witty with the strength to stand up against any authority.
The take that Jordaina Sydney Robinson has come up with on the afterlife had me laughing out loud many times. It is hilarious. But I also have to say that the first excitement of the afterlife was for me only aspect of the book that sets it aside from any other average book.
Besides Bridget, the other characters were interesting on the surface but did not really intrigue me as much as I would have liked. And as the book progressed, I found myself getting a little tired of Bridget and Sabrina’s lack of respect for others and I constantly rolled my eyes at the way that Bridget so rudely treated her housemates.
As the excitement and novelty of the world-building of this new afterlife wore off for me as a reader, the murder mystery and concept of the story was good. The most interesting parts of the book I found were the summonings that Bridget had to endure as well as other bits of information that we got given about being a ghost.
The ending gripped me a bit more than the middle section of the book but yet again the showdown itself provided very little intensity as a reader.
However, I did very much enjoy and appreciate the way the author introduced the readers to the idea of being dead and still very much enjoyed this book overall.
~
“Death did not look good on me.”
“After dying, I spent hours riding the Bus of Death with Charon, who, by the way, does not observe any traffic laws. And which I personally thought was an extremely insensitive mode of transport in my particular circumstances.”
“I did not want to contemplate what outfit she’d pick for me right now. I had enough problems for today. And I’d thought dying was the worst thing that could happen to a person”
“You know the phrase ‘I wouldn’t be caught dead in this’? Well, that literally applies here.”
“You’ve already died once this week. What are the odds it’ll happen twice in the same week? “
“Probably the same as getting hit by a bus. And look how that turned out.”