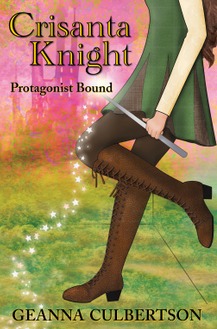 “I was going to be a great protagonist. At least that’s what my mom, Cinderella, kept telling me. I, however, had my doubts. Unlike most main characters at Lady Agnue’s School for Princesses & Other Female Protagonists, I was opinionated, bold, and headstrong.

Moreover, for a princess, I had a lot of issues. I’m talking vicious nightmares about people I’ve never met, a total stalker prince, and a Fairy Godmother for an enemy. But I digress. Because here’s the thing about living in an enchanted realm of fairytale characters, crazy junk you never planned on happens all the time. One minute you could be practicing fainting exercises in Damsels in Distress class, sword fighting in a field, or flying on a Pegasus, and the next, BAM! Your book has begun and you’re saddled with a prophecy that changes everything.

I still don’t know if I will be a great protagonist one day. But I know one thing about my fate, for certain. Despite what The Author and the antagonists have in store for me, whatever it costs. . .I’ll be the one taking charge of my own story. “

4.5 stars
This book was really good and I would definitely recommend it to anyone who loves a good fairytale. It has an awesome princess/badass heroine protagonist, a fairytale mixup and a great moral backstory. What more do you want?
Crisanta Knight is Cinderella’s daughter, destined to become a new princess, who should be completely complacent, submissive and above all, extremely princess-like. This is what she gets taught at her fairytale-finishing school Lady Agnue, and she absolutely despises it, because she believes she is more than just a proper royal.
This story definitely had a lot of character, and teaches a wonderful lesson to us women: we can be princesses and kick ass, and still look absolutely gorgeous (especially seeing as there is a charm for that! – but I won’t reveal too much, shhh…)
With her combat boots and her magical wand, Cristanta ventures out to change her destiny which the mystical Author has picked out for her and shows that women should take charge of their own lives with a passion, feistiness and a burning fire that is untamable. Not only that, she also manages to show a more vulnerable and open side – especially in regards towards a certain boy who sees right through her.
I also loved the fact that the author wrote this book in a way that made it feel like Crisanta was speaking directly to the reader through her thoughts – it made her sassy comments just that much funnier.
The only two, tiny issue I had with this book was that firstly I would have liked to see a bit more of Lady Agnue’s fairytale stereotypical day (maybe getting to meet more the protagonist and see more of their classroom interactions) and I also thought that – although I loved the ending – it felt like it didn’t resolve any of the plot points that I had wanted to know about.
Nevertheless, I think that the fact that this is only the first book in a series sounds extremely promising, and I am excited to get my hands on the second one (which is also why plot points getting resolved is only a small issue).
~

“We were like the Three Musketeers – the beauty, the brawn, and the – Wait. What was I exactly?”
“But no one ever taught us any curse words around here so witch was about all we had to work with.”
“Needless to say that while catching up with the other girls around the table throughout dinner was great, what was really satisfying was shoveling way-too-large amounts of food in my mouth when my teachers weren’t looking.”
“As much as it pained me to admit it, the closest we ever came to mortal peril around here was when we wore heels on the lawn just after it’d been watered.”
“I finally find something that comes easily to me at this school and it involves horse dung. Just perfect.”
“Maybe a girl can strive to be more than what she is.”
“Tiny waist be darned; I happen to be very fond of not having my diaphragm crushed.”
“Because you could give a dirt-bag a pearly white smile and a fancy suit, but he’d still be a dirt-bag.”
“A face peel, huh? You should be careful, Mauvrey. Even for a royal those can get pretty expensive when a girl has two faces.”
“Shouldn’t there be some kind of cosmic rule that says if you’re that annoying you at least have to have a bad hair day every once in a while?”
“All I had to show for my fairytale bloodline was a fondness for pumpkins and a talent for cleaning my room that I was ashamed of.”
“Nice trick. Overcompensating for something?”
“You keep this. I’ll keep my heart. And we’ll call it even. I don’t care what classics you believe in, Chance. But I do now they have no place here. I’m not saying they don’t matter at all. Goodness knows we’re reminded of their shadow every day. I’m just saying that i’m not going to live in it. Not now. Not ever. And certainly not with you.”
“Never underestimate the infinite power of a good pair of boots, I guess.”
“It was always nice to meet someone you had stuff in common with even if, you know, species wasn’t one of those things.”
“Wishes don’t change anything. But actions can.”
“Who I am isn’t written yet. And the only person who will have a say in it when it is, is me.”
“Victory getaway music anyone? No? Well, all right then, creaking staircases and cricket chirps it is I suppose.”
“Now I was beyond its grasp. Now I was moving out of its shadow. Now – the parameters, the lines, the walls – they were crumbling more with every added meter of distance I put between us. And soon enough, I knew they would never have the authority or the strength to contain me again.”
“Change, was possible. I’d seen it. I’d lived it. And darn it, I was going after it.”
“I could find the Author. I could rewrite my story. And I, Crisanta Knight, could become something more. I only needed to be brave enough to see it through.”