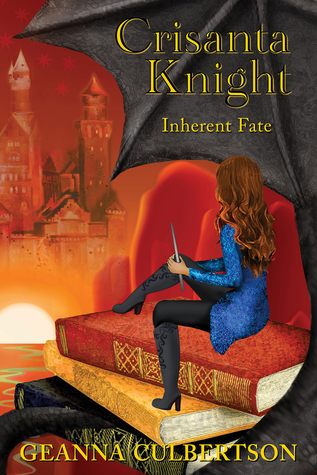 “Separated from their friends, Daniel and Crisanta have to work together to traverse the kingdom of Alderon and evade the antagonists who are trying to destroy them. Moreover, they must do so while figuring out whether or not they can truly be friends. With their mission drawing to a close, Crisanta’s magical powers are about to be revealed. But among these great truths, she is about to discover a strength that will be infinitely more powerful.”

Wow. That was the only word I could think after I finished the last word of this book and put it down. This book completely blew my socks off (not literally, as I was lounging barefoot in a reclinable chair in Greece, thank you very much indeed).
This series has without a doubt become one of my favorite series of all time and has never ceased to disappoint me. Geanna has constructed a fantasy world so intricate, magical, and yet also so relatable that I can’t imagine how anyone wouldn’t get sucked into the fabulous adventures of Crisanta Knight & Co.
For anyone who hasn’t yet picked up any of the Crisanta Knight books, the first book in the series (called Protagonist Bound, which I have also reviewed here) is about a girl called Crisanta Knight, daughter of the infamous Cinderella. She is destined to become a new princess, who should be completely complacent, submissive and above all, extremely princess-like. This is what she gets taught at her fairytale-finishing school Lady Agnue‘s, and she absolutely despises it, because she believes she is more than just a proper royal. With her combat boots and her magical wand, Cristanta ventures out to change her destiny which the mystical Author has picked out for her and shows that women should take charge of their own lives with a passion, feistiness and a burning fire that is untameable.
Needless to say Crisanta’s *cough* little adventure has so far led her through a lot of craziness and awesomeness alike. And I would highly, highly recommend anyone who hasn’t yet read any of the books yet to drop everything and go and read them immediately.
Warning. Spoilers Ahead.
This book was without a doubt the best book in the series (so far!). This was also the book where (almost) all of the mysteries surrounding Crisanta, the Author and Natalie were revealed.
Crisanta was witty as ever, and it made me extremely happy to see her and Daniel gradually warm up to one another, with them eventually becoming (sorta) good friends. It was also incredibly encouraging to see Crisanta finally accept herself, resulting in her finding out that that was precisely her biggest strength.

And boy was it badass to see her discover her magical powers of bringing inanimate objects to life. I think you could have heard my jaw drop from miles away as I found out Lucky the massive dragon was her doing. And then my jaw dropped even further when her Pure Magic Disease was brought to light. Oh heck no. But then again, Rumple always reminds us that all magic comes with a price, dearie, so why am I surprised? Sigh.

I’m really anxious to see how that all plays out, but I’m keeping all of my fingers crossed that Crisanta manages to fight against her destructive impulses and unlock her good Inherent Fate, not her bad one.

On a different note and probably very petty one at that, the thing that saddened me most in the entire story was the fact that Mauvrey was working for Adrian and tried to kill Crisanta with that corset. I know that she had always been a bitch to our beloved protagonist, but I have always had a soft spot for characters who hate each other reconciling and becoming best friends. Ah well, that ship has sailed. Goodbye Mauvrey.

Beyond that, this book was complete and utter perfection. Crisanta’s adventures were hilarious, entertaining and completely badass as always. And the fact that some of it happened in Germany (yay Germany!) where I currently live made it even better.

Now excuse me while I go and hibernate until the fourth book, The Liar, the Witch and the Wormhole will be released on June 1st 2018.