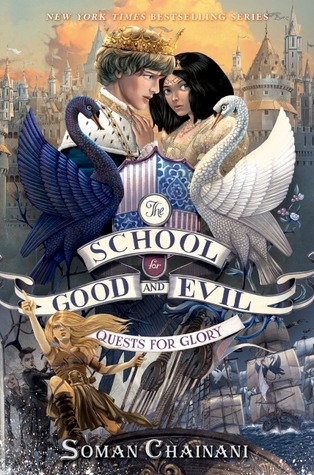 
“The students at the School for Good and Evil thought they had found their final Ever After when they vanquished the malevolent School Master. Now, on their required fourth-year quests, the students face obstacles both dangerous and unpredictable, and the stakes are high: success brings eternal adoration, and failure means obscurity forever.

For their quests, Agatha and Tedros are trying to return Camelot to its former splendor as queen and king. For her quest, Dean Sophie seeks to mold Evil in her own image. But soon they all feel themselves growing more isolated and alone. When their classmates’ quests plunge into chaos, however, someone must lead the charge to save them… “

5 stars ★ ★ ★ ★ ★
While I don’t think I loved this book as much as the first three books, I still really, really loved it. I suspect that the biggest reason why I think I have a much bigger love for the first original trilogy was because of the topics it centered around: friendship, Good/Evil, the rise and fall of the Evil Sophie and the dynamics between the Sophie/Agatha/Tedros trio. This book is much more adventure and action-orientated and focuses a lot more on the immediate pressing matters, rather than the relationships between the characters (even though there is still some of that going on, it just wasn’t as enriched with relationship-moments than the other three books).
If you haven’t read any of the The School for Good and Evil books, they are all amazing (including this one!), and you can check out the synopsis of the first book here.
Warning. Spoilers from here onwards.
Boy oh boy, did this book leave us all with an ENORMOUS cliffhanger. And while I did think that that Rhian was extremely guilty of something, I certainly didn’t expect him to pull out Excalibur and claim himself to be the King. Errr…WHAT?
And also, it was both very humorous and typical for Sophie to have found herself in a situation where she’s falling in love with the Big Bad Wolf of the story. (Poor her). But seriously, I actually got kind of sad when I realized that he was basically just manipulating her, because I truly think she does deserve a Happy (N)ever After. I’m also extremely curious as to what’s going to happen next with the two of them: is Sophie gonna keep fighting him, being on Agatha and Tedros’s side, or is she gonna end up like book #3 Sophie where she ends up being Queen Evil all over again?
My favorite scene of the entire book must be that scene where Agatha and Tedros were having their cute little date at that exclusive restaurant. To whomever wrote that menu: you made me very hungry indeed (even though most of the ingredients in the list sadly don’t exist in our world…sigh).
On a similar note, I was absolutely thrilled that Hort found Nicola to be with. At the end of the third book I had some small hopes that Sophie would eventually come around and maybe try to date him, but I see now that that is a futile ship which has sunken long ago. After all, Sophie deserves someone who will sweep her off her feet and be able to provide her her…luxurious lifestyle which she desperately wants. Hort and Nicola were incredibly sweet together, I definitely hope that turns out well for the both of them.
One of the nagging questions that loomed round my head after I finished this book (which I didn’t really think about in the moment) was this: what would have happened if Agatha hadn’t called Rhian to kill the Snake? It seemed like he was actually quite reluctant to kill him, which obviously I first thought was because of his vow to Tedros but now knowing that he was actually siding with the Snake the entire time, my question is why? Because after all, wasn’t the entire reason why the Snake managed to stay alive even after being ‘killed’ was precisely because Rhian was the one who ‘killed’ him? (Somehow Rhian must have faked the death). And wouldn’t the Snake have died completely by Tedros’s hand if Rhian hadn’t stepped in? Questions…Questions…
I am incredibly excited for the sequel, although I have no idea when it will be out. We don’t even have a title or a date, but I hope that Soman will reveal that soon, because I am dying to find out what happens next. What about you?